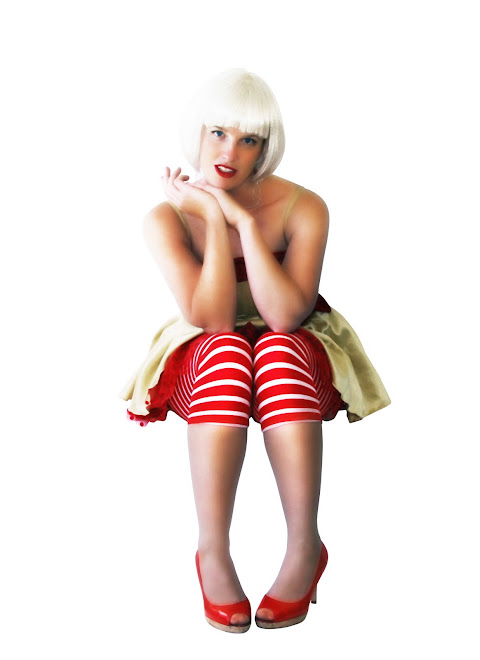 It's amazing where those K's end up! 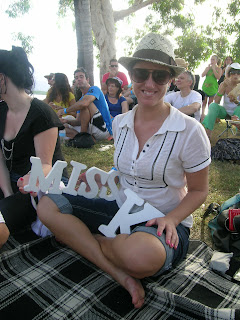 "This is a special announcement for Andrew Phillips, Uma Vernau and Klara McMurray to make their way to the boarding lounge, your plane is fully boarded and awaiting take off" It's 6-something am and this is the first thing I really remember hearing that day. It takes a tour with Gumpy to finally get my name announced on loud speaker at the airport... turns out it wasn't to be the last time this tour. We made our plane and enjoyed this view until the man who was lucky enough to have the window seat shut it out for all of us. No one will be enjoying sunrise this morning, I want a nap! 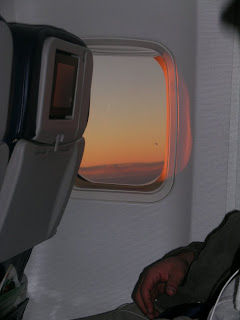 We made it to Port Douglas, the place I fondly refer to as my second home via a rickety and smokey Wicked van Gumpy and Uma had picked up in Cairns. It was to prove itself as the dodgiest tour vehicle known to man. I think they named it roadkill.
After coughing and spluttering our way up the Captain Cook Hwy, we made it to Port just in time for me to present my radio show: Miss K's Funk Fiesta #2. Here's my co-host and long-time radio conspirator Mr Nick Swainson 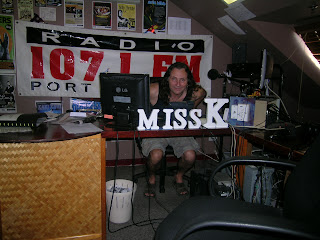 Next mission, dress myself up as Miss K in anticipation of meeting 10 or so other K's. If that's not enough to spin one's self out, then nothing is. Here we all up gearing up to board our Miss K float and parade down main street, fulfilling one of my childhood dreams since Moomba. Go Carnivale! 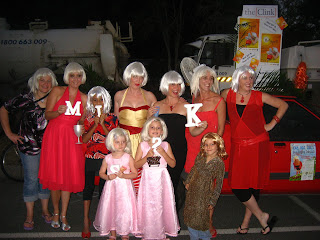 After what felt like a lifetime of kissing and waving, My Captain Funk stand-in Benny and I just got down to drinking champers and catching up. Not a bad way to spend a Friday. Pity I lost my voice and most of my memory of the night... oops!
Here's my feeble attempt at kissing and waving. I think Ben did a much better job then me, damn him! 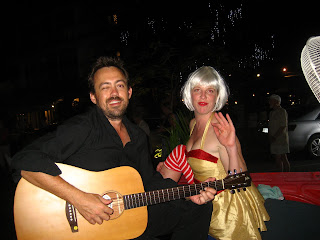 With Saturday night being our scheduled Cairns show, I was in a bit of a health-orientated pickle. I had the flu, was most definitely hung-over and I'd lost my voice. Off to Vibe bar to meet camp-as-a-row-of-tents Dave who's version of a sound check was to randomly move and turn all possible nobs on the sound desk before throwing his camp hands in the air and announcing he knew nothing about sound. My lost voice turned out to be the least of our problems. The fact that they had completely failed to actually advertise the show and he spent the lead-up hours calling all his gay mates to come was somewhat disconcerting. With out modest audience of about 15, 4 actually paying, we decided to start after waiting but never getting the green light from the organisers. Here are our only paying fans with their 3-tiered tapas. I was impressed. 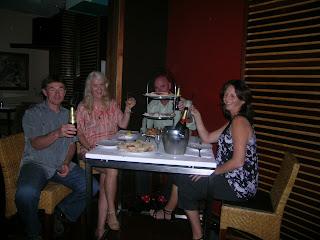 It took a painful 10 minutes for Gumpy who was by no means supposed to be the sound man to get our mics actually on and another painful 10 minutes of show to get them right but we got through. It was our most unprofessional show to date with more hiccups than that man on the simpsons who had hiccups for 15 years, but miraculously, the audience loved it. Phwew! 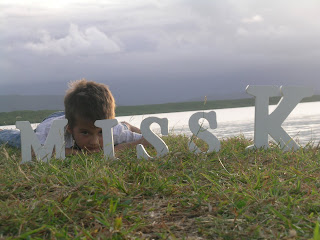 The next 3.5 days were filled with my usual social appointments and radio spots all of which I love doing. I did have to say no to a lot as I'd given myself a pep-talk about being there for a show, not for fun and re-gaining my voice before Wednesday's opening was my top priority. I even had bouts of loneliness as I'd never actually spent any time alone in Port before, but that was all part of my great sacrifice and by Wednesday, it had paid off. I was with voice, with health and with energy. Light the lights, crank the sound, Miss K is back! 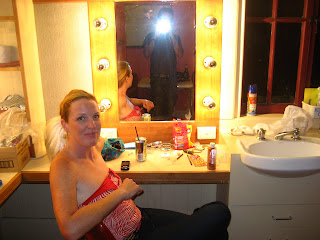 The shows kicked arse: our best to date. Ironically the highlighting moment that everyone keeps talking about was when some poor fool's phone made a loud texting noise and I decided to seek revenge for all live performers everywhere, grabbing his phone, calling the texter and humiliating both them and the phone's owner in front of the packed house of delighted on-lookers. Most people thought the moment was rigged it went so well, honestly, I wonder why I bother spending half a year writing a script when all anyone talks about are the improv moments...
So support acts were well received, door takings were happily pocketed, merch wasn't moved as much as I'd have liked but they have obviously forgotten the power of those underpants and the curtain fell on a beautifully successful show. What better way to celebrate all that is Port by making our way to Muso's at 'The Central' where Danny Ross (one of the support acts) and I embarked on an autograph-off and we all did what one does best in Port: Got Drunk! Home the next day via one more airport announcement, this time it was just for me and the toy gun I was carrying in my luggage. I was both thrilled and humiliated at the ordeal, but ultimately amused as the FNQ security guards had no idea what to do with it and eventually gave it back in a flurry of confusion and dead brain cells. I was picked up at the airport and whisked away to Daylsford where I was to perform the now roles of Bridesmaid and MC for my mate's wedding. Both roles went off without a hitch. 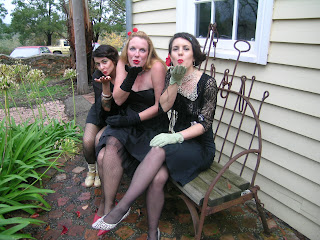 It's cold, foggy and the days are very, very short back here in Melbourne town, however the leaves are decorating the streets everywhere and I cannot help but think, its nice to be HUGE in Port, but I'll always call Melbourne.... home!
Posted by Miss K at 8:01 PM 4 comments: